Bippity Bobbity Boo. I’d rather have a martini or two.
When we were young, Mom was the wizard of homemade costumes. She believed you either committed to the character, or looked half-assed. If you’re gonna wear a ghost costume with conviction, you might as well get sheet-faced. Dad dressed as a boo-tiful ballerina or the jolly green giant, while Mom’s scarecrow was outstanding in her field.

If people in horror movies listened to me, they would still be alive.
The first movie I watched through my fingers was Halloween. I never looked at knitting needles the same way. Jason taught us that Friday kicks off a killer weekend. Texas Chainsaw Massacre villains disarmed people and carved them up like pumpkins. My nightmares weren’t only on Elm Street. Macabre mind-fuck movies like the Exorcist and Omen were more up my dark alley. Of corpse, iconic movies aren’t nearly as hair-raising without a bitchin’ soundtrack.

This witch can be bribed with chocolate.
The best part of Halloween is goblin up the goodies. I stuff my wrappers in a Smarties box to hide the carnage. Those fun-size candy bars are smaller than some of the vitamins I choke back, giving me permission to hoover. I’ve run out of candy more times than I can count after losing all self-control. Women flash each other knowing smiles in the supermarket checkout, as we sheepishly replenish our stock.

Drink up witches.
My husband Scott dressed in drag one year and was so convincing with his frosted tips and mini-skirt, he couldn’t walk to the bar without being hit on. Twerk or treat. From Cleopatra to Pippi Longstocking, every year was spook-tacular. To this day, we still love a good theme party. Whether it’s 80’s Madonna, or a crack hoe at the Pimp & Prostitute party, we’ll always give fangs for the memories. Happy Hallo’ Wine!

Tunes you should have on your iPod:
Radiohead ✹ Creep
Michael Jackson ✪ Thriller
Warren Zevon ✤ Werewolves of London 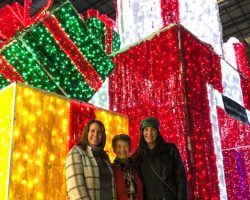 WOULD YOU DATE YOURSELF? 🥰If I had a nickel for every time I’ve been asked if I’m dating, I’d be a wealthy woman. The first time this question was posed, my husband had passed only seven months prior. I was still processing grief, anger and fear. It hadn’t occurred to me that I was now alone, and therefore seen as single. The idea of being with another man felt like cheating.Four years later, the question is asked so regularly, it’s become my new drinking game. Married friends are titillated at the chance to live vicariously, giggling like horny teenagers. They clamor to create my online profile, randy to swipe right with reckless abandon. Oblivious to stranger-danger, ghosting, and awkward advances, this era of courtship is completely foreign to us. Dorothy’s not in Kansas anymore, Toto.When the world shut down, I used my solo status to heal and take care of myself. Lockdowns, masks, and isolation bubbles aren’t conducive to meeting new people. That mask really brings out the crazy in your eyes… Cough here often?… I’ve worked hard to love the person I’ve become; strong, independent and confident. How can you expect these qualities in someone else if you don’t possess them yourself?Time’s gone by incredibly fast, but after 26 years with the same man, I allow myself the grace of being unattached without worrying I’m past my prime. Quite the opposite has happened. I can honestly say this is the best version of me so far. Funny, smart, and my rack has held up fabulously. Small wonder I’m dating myself. I’m a fucking catch!Taking myself out for a drink, shopping, or to the movies at the drop of a hat is a luxury. However, the conversation has become a little one-sided. A girl can’t be right all the time! I’m not lonely, I’m bored. I’m ready for new travel adventures and someone (with the means) to show me the world. Let’s give them something to talk about…#newblogpost www.sangriasisters.ca ... See MoreSee Less

Dine out to help out! 😋Our pals at the State & Main and the Original Joe's are donating 50% of the sales from their kids meals to our program for the whole month of September! You only have a few days left to do turn your dining out into helping out - so head over! ... See MoreSee Less

Give today and double your impact!The Matt Rumpel Family Foundation believes in making a difference for future generations. And because of their generosity, and the generosity of Qualico Calgary, all donations will be matched up to $100,000, until September 30th. Give today: bb4ck.org/give-once/ ... See MoreSee Less

Hooray for Hollywood 🤩 where people are so posh and snobby, they’re snoshy! ... See MoreSee Less

When this happens, it's usually because the owner only shared it with a small group of people, changed who can see it or it's been deleted.
View on Facebook
· Share